Heated Gloves screening at no.w.here on November 22nd at 7pm followed by a Q and A with Richard Thomas. The screening was well attended, maybe 30 people. One person had travelled from the Midlands to see the film, having bought a ticket for the LFF screening in 2015 but unable to attend. Someone else had known Maurice from despatch riding days. Richard asked me how Maurice might vote. It is fairly obvious that Maurice had been conservative with a small ‘c’ but would probably vote Green these days. I described him as a right wing anarchist. 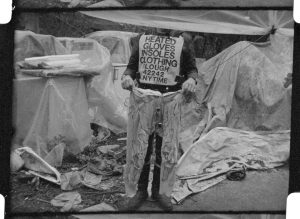